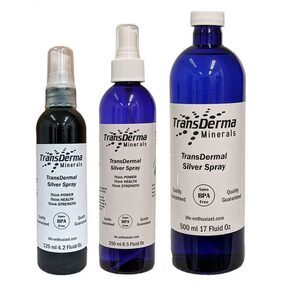 Effectively Kills Bacteria, Viruses and Fungi Without Side Effects! Silver has been known for its germ-killing properties for centuries. It was the antibiotic treatment used by thousands of medical doctors, prior to 1938. It was the only effective tool to kill infections. After antibiotic drugs were discovered, Silver was pushed aside.

Failing Antibiotics Antibiotics have been overused and misused for flu and other viral infections that don't respond to antibiotics. They're also abused on farms to keep crowded animals from infections and to gain weight faster.

Now after decades of overuse, antibiotics are losing their effectiveness. "Superbugs" are growing fast. Big pharmaceutical companies have shifted their research and development to more profitable drugs. Some germs are resistant to all available drugs... except for Colloidal Silver.

Silver to the Rescue Ingredients They are presented in a pure crystalline form measured in nanometer sized particles.  What does that mean to you?   Instant absorption, rapid effect, no toxicity or accumulation.  There truly is nothing else like this anywhere!

Silver has been used for over a millennia to prevent sickness and speed recovery.  It is a powerful anti bacterial and anti viral. It prevents illness and odors caused by bacteria. It can be used topically and internally.

Used as an internal antibiotic, also antiviral.  Helps strengthen the immune system. Great to take daily to reinforce your body against sickness, or in greater doses to help combat an illness.  Because silver kills odor causing bacteria, it has many applications.

Directions for Use
Swish 1 teaspoon in your mouth for 30 seconds, 3 times daily. Safe to swallow (and highly recommended). Colloidal Silver is tasteless.

Start taking immediately when you feel a cold or flu coming on. Especially helpful for airplane travel, or before entering a hospital.

The best... from finest and purest ingredients. Natural antibacterial, antiviral and antifungal, without side effects! Some germs are resistant to all available drugs... except for Nano Crystalline  Silver.